The world’s first construction with the sitting Buddha in the image of Thousand-Hand Thousand-Eye Guanyin as its iconic design, The Holy Thousand-Hand Guanyin at Tamsui,has successfully challenged the world record. On September 10, 2019, this Holy Statue -- 30.3 meters in height and 35.9 meters in width -- was acknowledged by GUINNESS WORLD RECORDS™ as “The Largest Steel Sculpture”of the world.

The Thousand-Hand Thousand-Eye Guanyin Bodhisattva Statue at Tamsui is not only magnificent; its iconographic design is also beyond compare. In addition to the 11 Buddha heads, with the largest up to 7 meters tall,the most striking characteristic of The Holy Statue at Tamsui is the hands. There are 36 big hands, called “True Dharma Illumination Buddha Hands 正法明佛手,” holding in total of 33 dharma jewels, and 1008 hands with eyes in the palms, called “Guanyin’s wisdom eyes and compassion hands 觀音慧眼慈悲法手.” Guanyin’s one thousand hands with eyes are usually arranged into a form of “dharma wheel” standing vertically on the back of the Guanyin, but Master Lee innovatively designs it to be placed horizontally on top of the lotus throne – the first of its kind. Here the dharma wheel, 47 meters in diameter with 1008 hands in the array of concentric circles, serves as the “mount” or “carrier” of the Holy Statue on the one hand, and on the other, it signifies Guanyin’s virtue of escorting us to the Holy Pure Land. Each eye in the palm of the hand functions also as an illuminating device.

Master Lee’s design of the “lotus throne” is also innovative. Breaking away from the traditional format, he fashions 2560 stainless steel pieces in different radians into 128 lotus petals in two rows.The lotus throne turns into a dimensional totemic openwork, which not only facilitates air circulation, but also allows the light to shine through. It is both artistic and energy-saving.

In Buddhist sutras, the Thousand-Hand Thousand-Eye Guanyin is a bodhisattva at the thirteenth ground, equivalent to a Buddha; he is best known for his vow of benefitting all sentient beings even at the cost of his ownexistence. To honor Thousand-Hand Guanyin’s everlasting compassion, the Holy Statue Master Lee vows to build is a “Millennia Guanyin,” an architecture that will stand erect for the next 5,000 years. Therefore, all construction details – ranging from design to construction materials, structural safety, and architectonics – follow the highest standards and the most rigorous procedures. It is a steel reinforced concrete (SRC) building with high-scale earthquake-resistance safety equivalent to that of a nuclear power plant, with seismic capacity for a seven-magnitude earthquake.It is also built with eco-consciousness in mind, including energy saving, carbon reduction, and resource regeneration. It has now acquired a Green Building Label.

The establishment of The Thousand-Hand Thousand-Eye Guanyin Bodhisattva Statue at Tamsui embodies significance in both the Buddhist history and world architecture, considering the architectonic challenges the construction team has overcome, especially in developing the innovative world-leading assembling techniques.

The Thousand-Hand Thousand-Eye Guanyin Bodhisattva Statue at Tamsui is located not far away from Yuan-DaoGuanyin Temple – both are connected through a pathway, about five to ten minutes of walk. On November 16, 2017, when the Thousand-Hand Thousand-Eye Guanyin Bodhisattva’s 11 Buddha heads, 36 big hands, 33 dharma jewels, and the primary form of the lotus throne were all set up, Master Lee held the “Thousand-Hand Thousand-Eye Guanyin Bodhisattva．Perfect Manifestation Dharma Assembly” to initiate the establishment of Guanyin’s “Holy Pure Land.”Now with its basic structure in place, we are working on the exterior and interior decorations. We welcome one and all to visit and contribute in any capacity. All together, we wish to build a Holy Pure Land in Taiwan for all the people around the world, including those we were associated with in the past lifetimes and will be in the future. 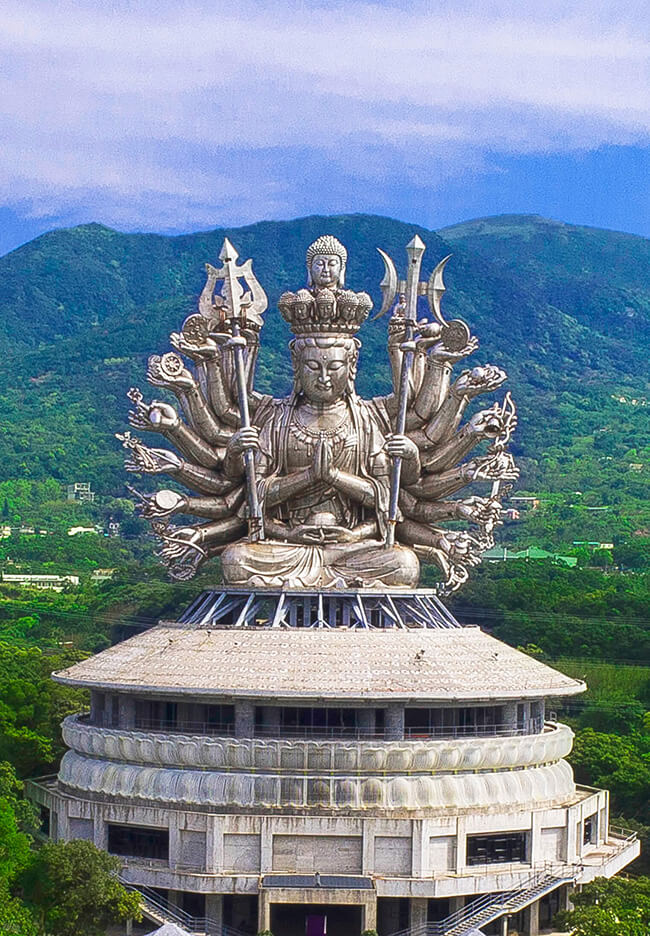