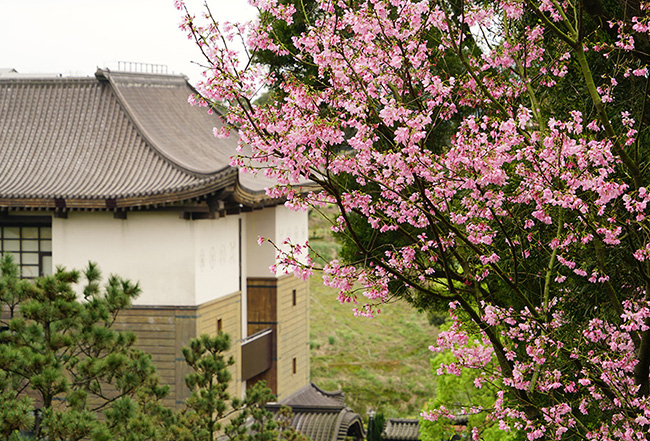 Located in the middle of the mountains, Yuan-Dao Guanyin Temple enjoys many natural treasures and endemic species. Visitors have a chance to view different scenery as seasons change.

There are nearly one hundred cherryblossom trees in the garden, ranging from Yaezakura cherry trees to Yoshino Cherry, Japanese Showa Cherry, and Taiwan Cherry trees. Imagine the cherry blossoms flying all over!

Spring can be seen along the way of the Green Pathway. Nearby the goat shed, along an obscure lane leading left, you’ll be able to encounter a gorgeous wisteria wonderland. Here the purple butterfly-like flowers in full bloom sway with the wind, free and elegant – a scene of blissful ambiance.

The direct descendants of the tree under which Prince Siddhartha Gautama achieved awakeningand became the world’s first Buddha are now growing in the garden of Yuan-Dao Guanyin Temple.

The story goes back to Bodh Gaya of northeastern India 2500 years ago. Prince Siddhartha sat meditating under the tree scientifically named Ficus religiosa and attained Bodhi (or ‘enlightenment’), becoming Sakyamuni Buddha. Since then, this tree has been referred to as “the tree of enlightenment” or “Bodhi tree,” a sacred tree for the Buddhists.

This particulartree had undergone various destruction and deterioration at different times by the non-Buddhists and eventually died out during the 12th century. Fortunately, around 1500 years earlier, scionof thisBodhi tree was brought to Ceylon(now known as Sri Lanka) by King Asoka's daughter, Sanghamittra, andin 288 B.C., was planted in the island’s ancient capital, Anuradhapura, where it is continuously growing to this day. In 1870, a cutting from this Sri LankanBodhi tree was brought back to Sakyamuni Buddha’s original site of enlightenment, Bodh Gaya, where the newly planted Bodhi tree isthriving green and lush.

In 1913, another cutting from the Sri Lankan Bodhi tree was brought to Hawaii and given to the hand of Mrs. Mary Robinson Foster. Ms. Foster planted this sapling in the groundings of her house in Honolulu -- this estate was later turned into the Foster Botanical Garden.

In 1993, the Foster family gifted a seedling of the holy Bodhi tree to Mr. Yang Gui-Biao, who donatedthis valuable gift to Forshang Buddhism in 1999, the year when Forshang Buddhism World Center established a Lecture Hall in Hawaii and began to take students there.On September 4 of 1999, the day following the donation, Master Lee planted this 2-meter high seedling in the garden of ForshangWorld Center in Hawaii.

In 2017, the seed of this particular Bodhi treewas successfully cultivated. In March 2018, five Bodhi seedlings in height of 90 centimeters from Forshang’s Hawaiian garden were planted in Yuan-Dao Guanyin Temple. The offspring of the historic holy tree where Sakyamuni attained enlightenment are now part of the Forshang Family.

In the area near the Grand Gate, Water Wall and Reclining Buddha, you may see some blue silhouettes with gracefultails moving around, flying like forest fairies. They are Taiwan’s national treasure, the exclusive “Taiwan Blue Magpie,” one of 15 protected endemic birds in Taiwan.