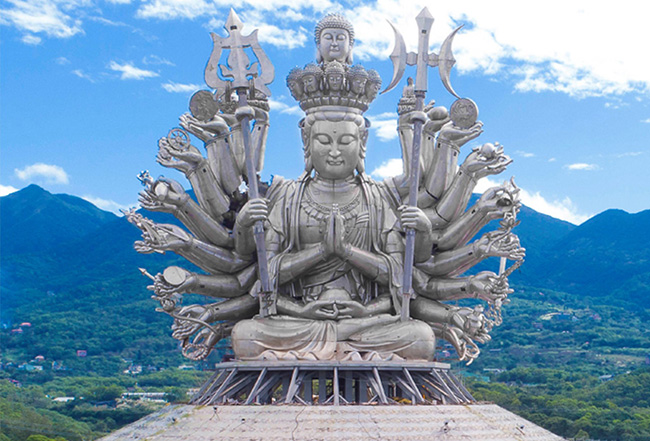 What we establish is not the largest Thousand-Hand Thousand-Eye Guanyin Statue of the world, but one made with the largest capacity of compassion. What we build is not merely a statue that draws acclaim and renown far and near, but one that gathers people with affinities, the predestined as well as the yet to be established affinities.

What we pursue is a Holy Thousand-Hand Thousand-eye Guanyin Statue with compassion as its height and predestined affinities across the past, present, and future as its breadth – and this is the true purpose of constructing Guanyin’s “Holy Pure Land.”

In Buddhist sutras, the Thousand-Hand Thousand-Eye Guanyin is a bodhisattva at the thirteenth ground, equivalent to a Buddha; he is best known for his vow of benefitting all sentient beings even at the cost of his own existence. He is named “Thousand-Hand Thousand-Eye Guanyin,” or simply called “Thousand-Hand Guanyin,” for his possession of 1000 hands, with each hand containing an eye in the palm. The Thousand-Hand Guanyin is also known for his mantra of Great Compassion Dharani 大悲咒 (Mahā Karuṇā Dhāranī). Sakyamuni Buddha once said to his disciple Ananda how marvelous this Dharani is: “Its mighty power can be referred to in various names: extensive and complete, great mercy beyond any confrontation, mantra for relieving suffering, mantra for longevity, mantra for extinguishing the evil destinies, mantra for destructing bad karmas, mantra for wish-fulfilling, mantra for enjoying the freedom as you wish, mantra for speedily attaining the ten-ground bodhisattvahood.” Whether in terms of compassion or mighty power, it is truly amazing.

THE FORSHANG HERITAGE, THE PATRIARCHS’ ENTRUSTMENT

Forshang佛乘 literally means ‘Buddha vehicle,’ that is, the vehicle for attaining Buddhahood. As to Forshang Buddhism 佛乘宗, it is a dharma heritage that offers a complete set of supreme doctrines or dharmas to awaken one’s Buddha nature, called Supreme Huayan上品華嚴 (shangpinHuayan), and to assist in transforming one’s physical existence into an immortal Buddha reality in this lifetime.

The Forshang Buddhism’s Primary Patriarchis Miao-Kong妙空 Bodhisattva, an incarnation of the Dharma-Body Buddha, namely Da Zi Zai Wang Fo大自在王佛. In the early twentieth century, Miao-Kong Bodhisattva made appearance in form of a holy ascetic spiritual practitioner in Yunnan Province of southwestern China, where he delivered many miracles. His appearance in this sahaworld was for one and only one purpose – to look for his successor, namely Yuan-Dao Bodhisattva, to carry forward the Forshang Heritage, the so-called “Supreme Huayan．Forshang Dharma.” To lay the foundation for the Forshang Heritage to develop in the next 5,000 years, Miao-Kong Patriarch specifically instructed Yuan-Dao Bodhisattva: “Do bring Forshang Dharma to Taiwan, where Forshang Buddhism will take root andbloom throughout the entire world.”

To carry out the Primary Patriarch’s instruction, the 2nd Patriarch Yuan-Dao Bodhisattva came to Taiwan in 1953 and began his calling of preaching Forshang Dharma. In 1988 he located his dharma heir – Master Lee Sun-Don – and appointed him as the 3rd Patriarch after a series of thorough evaluations and complete transmission of the Forshang Heritage. Yuan-Dao Bodhisattva told his successor, Forshang’s 3rdPatriarch Master Lee: “You have to build Forshang Buddhism’s Patriarch Temple as well as Thousand-Hand Guanyin’s Holy Pure Land.” He added, “Guanyin is also one of our Patriarchs.”

To deliver the missions entrusted by the 2nd Patriarch Yuan-Dao Bodhisattva, and to leave an emblem of Forshang Buddhism as the spiritual guidance of the saha world, Master Lee and his disciples worked from scratch to establish the Forshang Patriarch Temple at Tamsui of New Taipei City, starting in 1997. This sanctuary, officially named “Yuan-Dao Guanyin Temple,” was established and opened to visitors in the year 2000.

To continue to fulfill the 2nd Patriarch’s wishes, in 2002, Master Lee initiated his plan of building The Holy Thousand-Hand Guanyin Statue at Tamsui. After 11 years of toil and hardwork, from locating the site to passing the Environmental Impact Assessment and getting the construction permit, the groundbreaking ceremony of the “Holy Pure Land” was finally held on November 3, 2013.