「Yuan-Dao Guanyin Temple is constructed not merely as a building. It should be a work of art, an artwork to be passed down from generations to generations. It should not be merely a building located in Taiwan, but one looking towards the world…. It is a cultural heritage of the future, built forinnumerous spiritual practitioners to come. 」

Yuan-Dao Guanyin Temple, also referred to as Forshang Patriarch Temple, is a Pure Land in contemporary modern world. Even though hidden on the hill of Tamsui in northern Taiwan, it overlooks the Tamsui River emptying into the Taiwan Strait and embraces the Da-Tun and Qi-Xing mountains. Here one may enjoy the glittering sunset with sky and water converging and the energizing daybreak with freshness and purity emerging. This is where mountains and sea meet and resonate with one another.

The main building is a traditional Tang-styled architecture in appearance. With wood and granites as its decorating tone to accord with its woody, hilly surroundings, it reveals an ambiance of naturalness and simplicity.

In structure, however, this four-story building is bolstered by modern architectonic;it is a steel-framed reinforced concrete (SRC) construction with the foundation used usually on buildings over 20 stories in height. Such a construction secures the building from the destruction caused by earthquakes or other natural disasters. More importantly, it is meant to standfor the next 5,000 years– beinga “home” for innumerous spiritual practitioners to come and even a “world heritage” of the future.

The time span of an architecture’s existence for many millennia is certainly one criterion for being reckoned as a “world heritage.” But what makes Yuan-Dao Guanyin Temple more significant is its demonstration of the true values of human existence – its creativity, perseverance,and spirit to constantly transform and transcend. Specifically, it embodies aperfect harmonization of two great civilizations in history: Indian Buddhism and Chinese Book of Changes. The spacial design of the Temple is a manifestation of such an ingenious harmonization, called “Nine Energy Transformations.” It utilizes nine elementsto construct a field imbued withenergies that are powerful and yet implicit, purifying and resonating – a very unique spatial aesthetics that harmonizesheaven and earth. The nine elements are as follows:

Vein:to transform the substantial into spiritual | Base:to converge energies from all directions | Exertion: to accord with nature

What’s more, while drawing on the wisdom of the ancient civilizations, the spatial field of Yuan-Dao Guanyin Temple is infused with the contemporary’screativity, namely, the “totemic energy aesthetics” exclusively developed by Master Lee Sun-Don, the 3rd Patriarch of Forshang Buddhism.“Totem” is a state of harmony and of balance of cosmic energies, which can be perceived when one attains enlightenment. The enlightened one may use lines and colors to capturethe evolution and transformation of such cosmic energies – a unity of sound, light, and form – so as to evoke resonance from the viewers, and this is called “totemic energy aesthetics.” The more advanced the spiritual practitioner is, the more powerful the totemic energyaesthetics created will be, and more lively the field constructed accordingly can be.

In Yuan-Dao Guanyin Temple, the creations of totemic energy aesthetics can be found everywhere, from stairways and hallways to the courtyard, and even the stainless steel sculpture in the pond of the garden. What is especially classic is the Four Dharma Seals on the outer walls of the Temple’s fourth floor. Made of stainless steel, they radiate under the sunlight and spark with silver-white glitter, solemn and splendid. But note, as totemic energy illustrations,these dharma seals are more than works of art; they in fact encode the ultimate secrets of the universe, secrets yet to be decoded by scientists in the future. 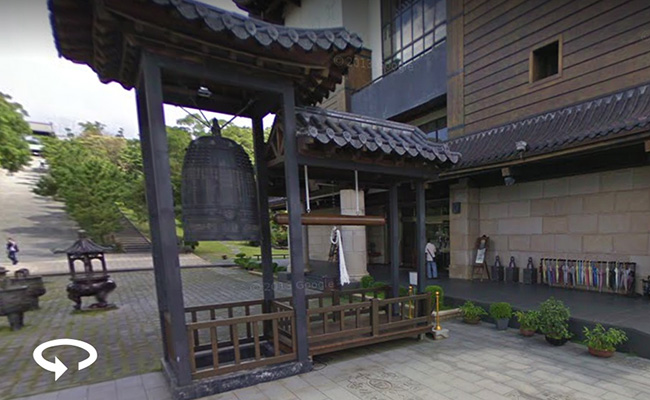 The Buddha worshipped in the main hall is Da Zi Zai Wang Fo 大自在王佛. It is accompanied by four of the world’s most well-known bodhisattvas, namely Guanyin 觀音 (Avalokiteśvara, signifying the virtue of compassion), Wenshu 文殊 (Mañjuśrī, Bodhisattva of wisdom), Dizang 地藏 (Kṣitigarbha, Bodhisattva of great vow), and Puxian 普賢 (Samantabhadra, Bodhisattva of practice), together with the guardian bodhisattvas of Weituo 韋馱 (Skanda) and Qielan伽藍 (Samghārāma). All these statues are cast in bronze. The Da Zi Zai Wang Fo is 429 centimeters tall and weighs 3,600 kilograms; the four bodhisattvas are each 348 centimeters in height and 1,200 kilograms in weight, and the guardian bodhisattvas, 154 centimeters and 280 kilograms. People may come here to pray for wisdom and enlightenment, purification and liberation, honor and success, health, wealth, harmonious social relationship, and so on.

Da Zi Zai Wang Fo, literally ‘the ultimate Buddha of great freedom,’ refers to the ultimate Dharma-Body Buddha, also known as Mahā Vairocana in Sanskrit. About 2500 years ago, when Prince Siddhartha Gautama sat meditating under a tree and achieved awakening, becoming Sakyamuni Buddha, he looked up the stars in the east and delivered his first and foremost Buddhist teaching: “Very good, indeed! All beings are in possession of Buddha nature and will attain Buddha fruition eventually.” Da Zi Zai Wang Fo represents exactly what Sakyamuni Buddha means by “Buddha nature” as well as “Buddha fruition.”

The name of Da Zi Zai Wang Fo appears in many scriptures. In the Sutra of the Great Holy Wenshu Bodhisattva’s Buddha Land and Magnificent Virtue大聖文殊師利菩薩佛剎功德莊嚴經, it is said, “In the northeast there is a world named Qian Zhuangyan千莊嚴, where lives a Buddha called Da Zi Zai WangBuddha大自在王如來…. The sentient beings in this world are peaceful and blissful.” The founder of Chinese Zen Buddhism, Bodhidharma 達摩, also mentioned about it in his “Bloodstream Sermon 血脈論”: “When one’s wisdom is enlightened, one knows the mind – the mind that is called ‘dharma-nature,’ also called ‘liberation,’ a mind that can never be restrained by life, death, or whatsoever. This mind is called Da Zi Zai Wang Buddha大自在王如來.” The 2nd Patriarch in his “Preface to Dharma Essentials法要序” also stated, “Da Zi Zai Wang Fo is the core of all sentient beings’ intrinsic nature to become Buddha, and the collectivity of every Buddha’s Dharma-Body in terms of Buddhist doctrines and essence.”

As these sutras illustrate, each Buddha has his own name which speaks his vows and characteristic virtue, but when it comes to the essence of Buddhahood or the Dharma-Body, they are all the same – namely, Da Zi Zai Wang Fo. Although we are not yet enlightened, we are also Buddha, Buddha of the future, and therefore, we are also Da Zi Zai Wang Fo. In this sense, to worship Buddha Da Zi Zai Wang Fo, or to chant the Buddha’s name – Na Mo Ben Shi Da Zi Zai Wang Fo 南無本師大自在王佛, we not only receive blessing from all the Buddhas, being peaceful and blissful, but also getto activate our innate Buddhahood that is absolutely free and unbound, that is replete with all wisdom and kindness, and that is omniscient and omnipotent in nature.

Forshang’s 2nd Patriarch, Yuan-Dao Bodhisattva, is also honored and worshipped. His statue, placed to the right of the main hall, is an enlarged edition of the one made in August 1997 in commemoration of the 80th anniversary of his birth, four years after he entered nirvana. There are couplets hung on either side of the Statue: “Innate nature is the supreme; the ten greats are in oneness自性華嚴十大一如” and “Myriads of dharmas are perfectly unified; myriads of virtues are beyond sublimity萬法圓通萬德莊嚴.” These are words Forshang’s 2nd Patriarch Yuan-Dao Bodhisattva inscribed on the 3rd Patriarch Sun-Don’s personal copy of The Avataṃsaka Sutra華嚴經, the most grandiose and comprehensive Buddhist scripture. The couplets speak not only the means to attain Buddha fruition, but also the dharma transmission of Forshang heritage between two patriarchs

“Holy relics” (sarīra舍利) are substancesformed in the process of cremationas a result of the conversion of mass and energy, very rare to come by. According to Sakyamuni Buddha, the production of “holy relics” is an indication that the cremated deceased has entered the Pure Land. This may happen when the deceased has come to enlightenment. Sometimes, and very rarely, the holy relics are procured not by the deceased’s personal attainment but because of the deliverance of an enlightened Master – and this is the case for the holy relics exhibited here.

The Abbot of Yuan-Dao Guanyin Temple, Master Lee Sun-Don, produces the “Forshang Deliverance Rice 佛乘往生米”to deliver the deceased to the Pure Land. Moreover, not only can human beings be cremated into “holy relics,” so do any other beings, thanks to the Forshang Deliverance Rice.The exhibit of “holy relics” here not only demonstrates Sakyamuni Buddha’s teaching that all beings are equal for possessing Buddhahood, despite different life forms; It also expresses our gratitude for enjoying Buddha Dharma around us!

With a global video conference system as well as two retractable big screens, this lecture hall allows Taipei, Taichung, Kaohsiung and branches abroad to have synchronous online classes. It is open to Forshang disciples for taking meditationon Saturdays and Sundays and for short-term dharma retreats.